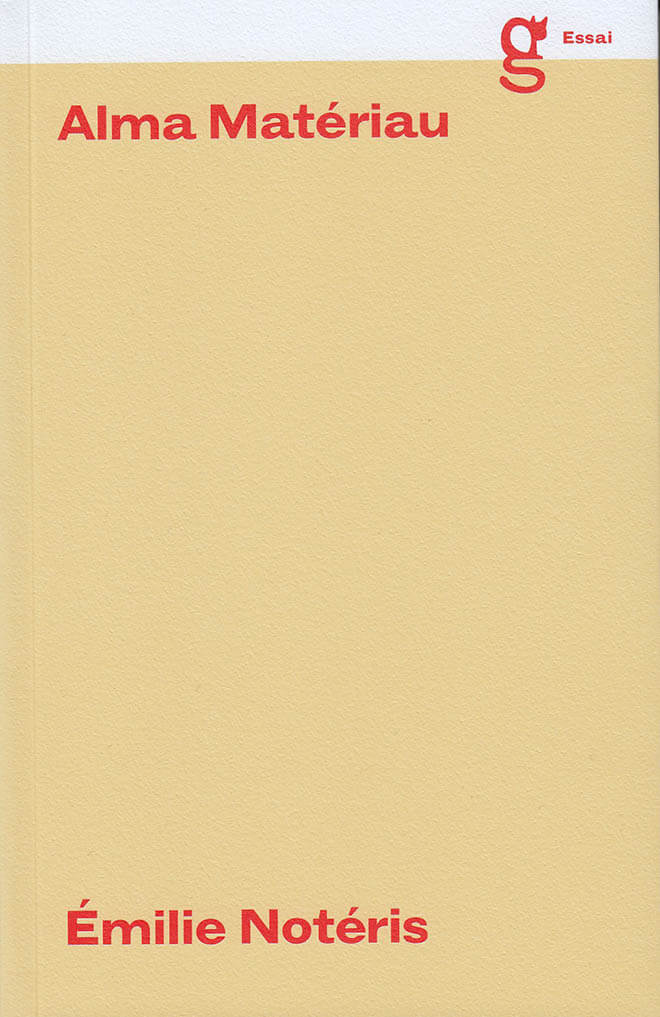 Émilie Notéris focuses her analysis on artworks created by women in the twentieth and twenty-first centuries, in a book that is at once literary, aesthetic and political.

On the occasion of its tenth anniversary, Paraguay creates a collection of essays and book-length interviews, published in, or translated into French. The books in this series are commissioned ones, books developed independently and freely, without a deadline. They articulate thoughts on art and political positions in the present through situated and experimental literary writing. 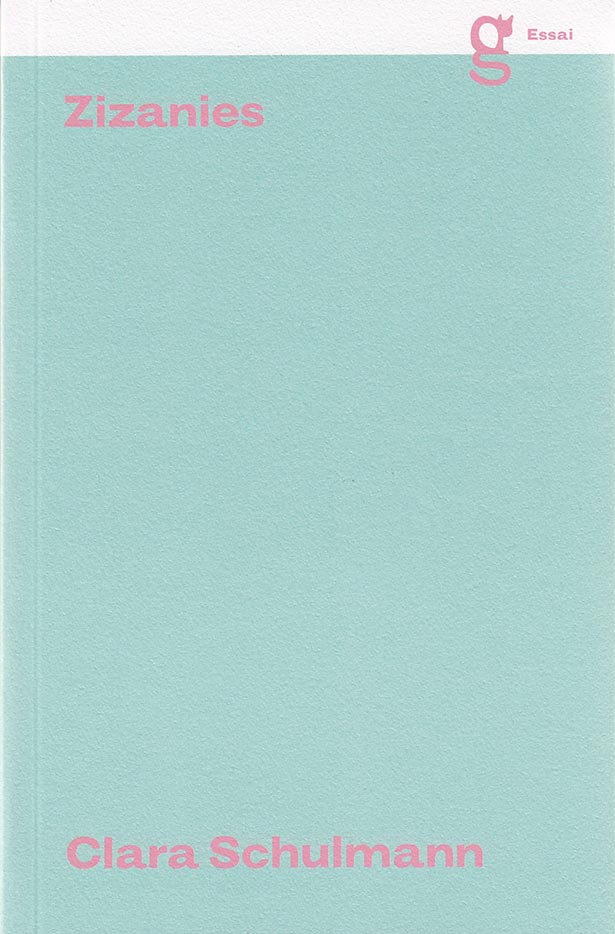 As she tries to collect them for an essay that she is wanting to write, voices begin interfering in Clara’s Schulmann life. Voices of women, heard on the radio, in podcasts, songs, and films; voices of novelists or feminist theorists; voices of friends or of strangers overheard in the street. Like weeds, like bad seeds (what « zizanies » stands for in French), these wayward words invade her thoughts and her life, and the essay that she once had in mind unfolds in a picaresque tale full of twists and turns. Zizanies is a timely and elegant narrative that reveals Clara Schulmann as a new author whose own voice is going to matter in the years to come. (The texts in this book are French only.) 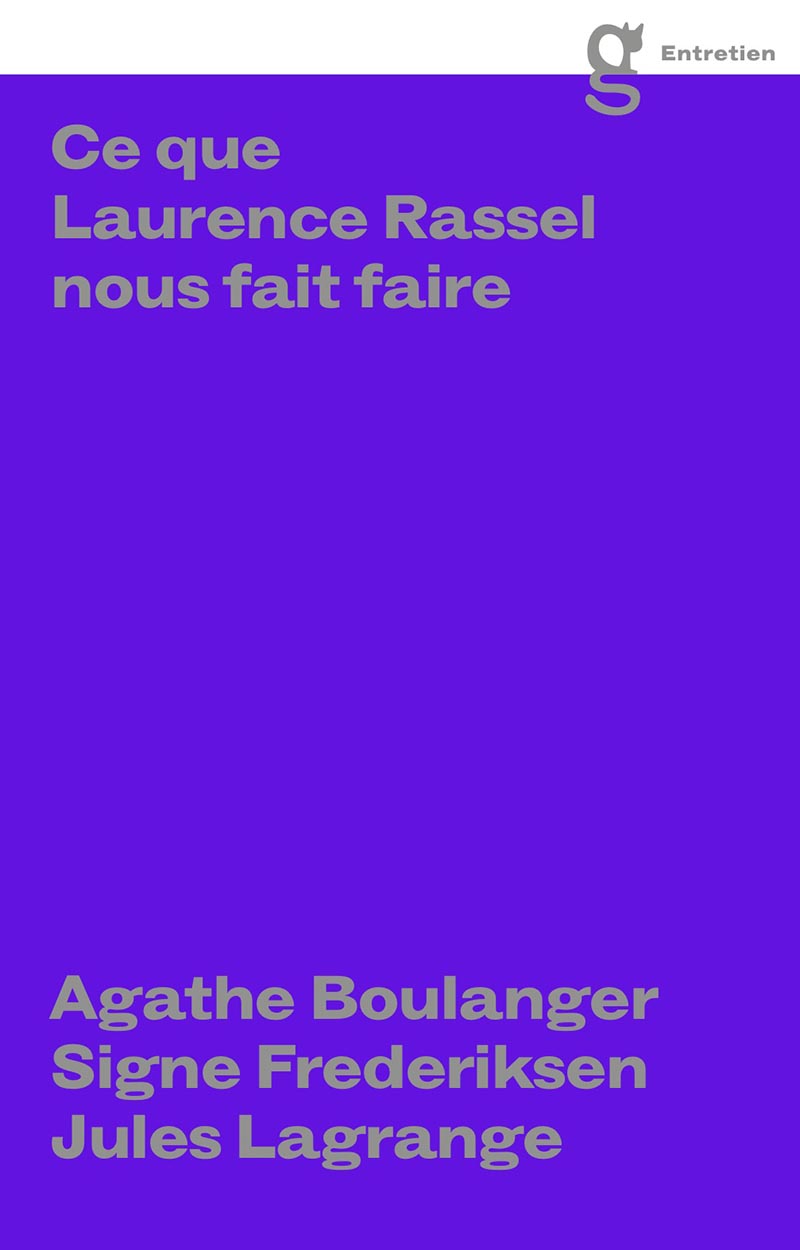 In 2018, a group of three visual artists — Agathe Boulanger, Signe Frederiksen and Jules Lagrange— started a year-long conversations with Laurence Rassel, exploring her social and educational background, her ways of working, and examining the tools she applies in her daily practice of running institutions: feminism, the open source and free software movements, and the institutional psychotherapy developed by François Tosquelles and Jean Oury in the psychiatric field around the mid-20th century. 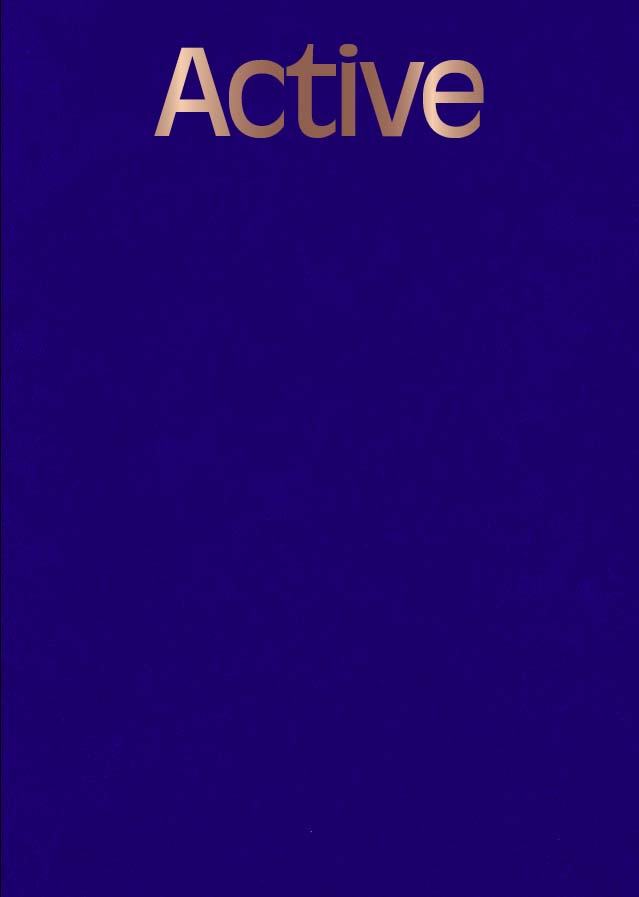 In this book, the 1923 manifesto “Active Art” by Latvian philosopher Andrejs Kurcijs triggers a series of responses by writers, artists and curators on the notion of activism, past and present: art for political purposes, art for its own purpose or art with no purpose.

All the texts collected in this volume aim at considering the active part of writing according to the definition given by Kurcijs. It is true of the book design by Laure Giletti and Gregory Dapra too. Contributors include curator Rebeka Põldsam, artists Evita Vasiļjeva and Eva Barto, writers Bella Marrin and Robert Glück, and poet Laura Boullic. It also includes the reprint of an essay from 1987 by James Baldwin, commissioned by the African Center in New York, and an in-depth conversation between the editors of the books and philosopher Ainārs Kamoliņš.

Stemming from a series of works by Sidsel Meineche Hansen, this monographic catalogue offers a range of perspectives on urgent issues around gender, sexuality and labour in the digital age.

This book orbits “Second Sex War”, a series of works by Sidsel Meineche Hansen addressing political and ethical questions arising from the use of digital bodies in contemporary visual culture and the means of production and distribution for these commodities. Realising that the same avatars are used across the pornographic, gaming and cultural industries, she investigates the working conditions and relationships that structure these fields. Through numerous essays and conversations, Second Sex War, the book, emphasises her collaborations with various practitioners (animators, musicians, writers) and the way they have inflected her practice. Media theorist Helen Hester (author of the Xenofeminist manifesto) reflects on the limitations of the porn industry and the use of female avatars. Artists collective Radclyffe Hall talks to photographer Phyllis Christopher about early lesbian erotica magazine in the 1980s. Linda Stupart compiles quotes by Sara Ahmed, Kathy Acker and Ursula K. Le Guin to consider what is radical sex today.  Artist Hannah Black's contribution, which opens the publication, reads like a manifesto for artists being crushed under the weight of current political circumstances. 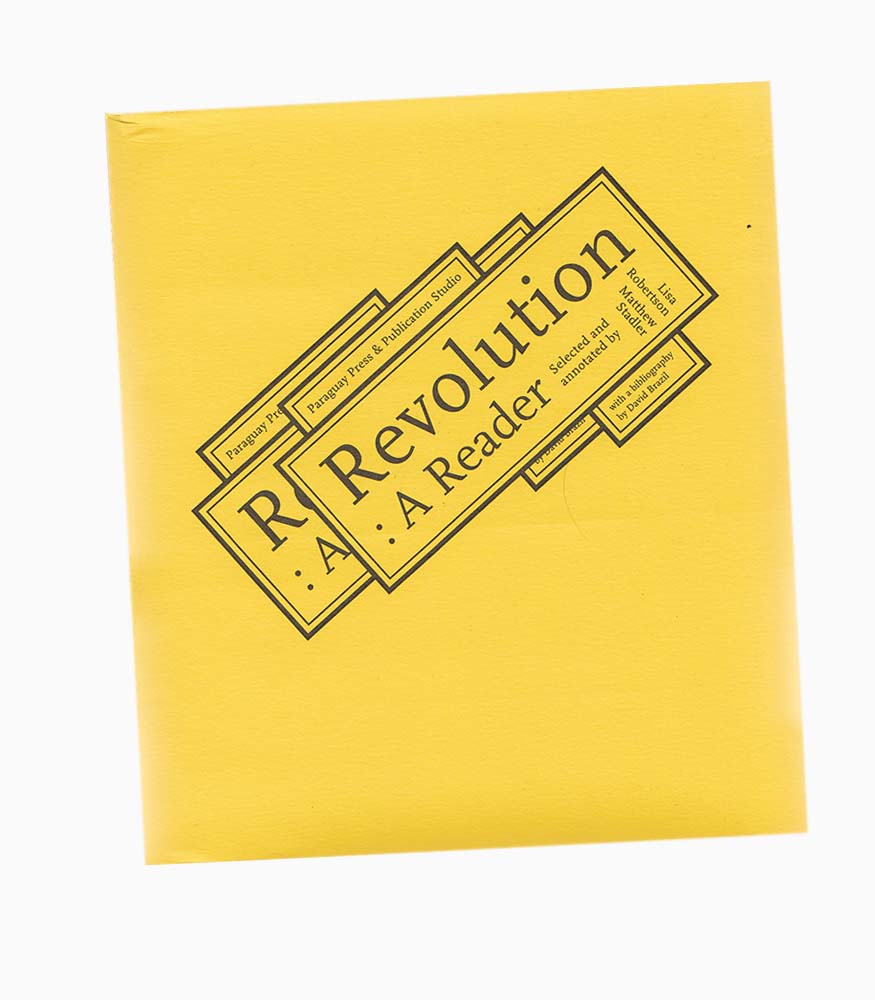 Revolution: A Reader collects texts from across many cultures and times and organises them roughly along a chronology of living, from 'beginning' to 'childhood', 'education', 'adulthood' and 'death'. The book brings the embodied fact of revolution into the lived present by engaging readers with language that takes us there, no matter where we are to begin with. We are all in revolution, now. Reading can make this fact primary and conscious and shared.

Heavily annotated throughout, the book is, quite literally, a conversation. The annotations, by Lisa Robertson and Matthew Stadler "composed simultaneously and in response to one another“ stitch a web of arguments that link the book into a single thing, a reader. The book also features a narrative bibliography of revolution by David Brazil. 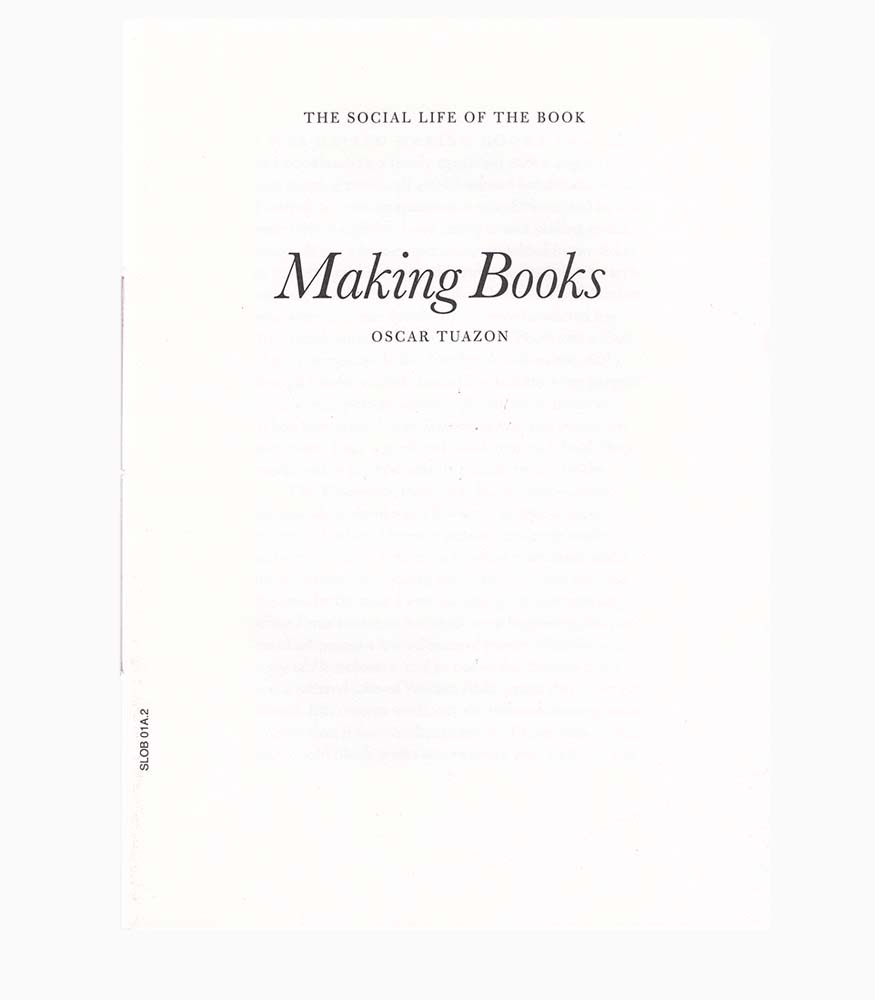 “I was raised making books” recalls US artist Oscar Tuazon at the beginning of this essay, that addresses the very oft-announced death of the book at the same time as it envisions the conditions of its rebirth. This unflinching reflection on how publishing has changed, also develops as a speculation on the artist’s own approach to sculpture. 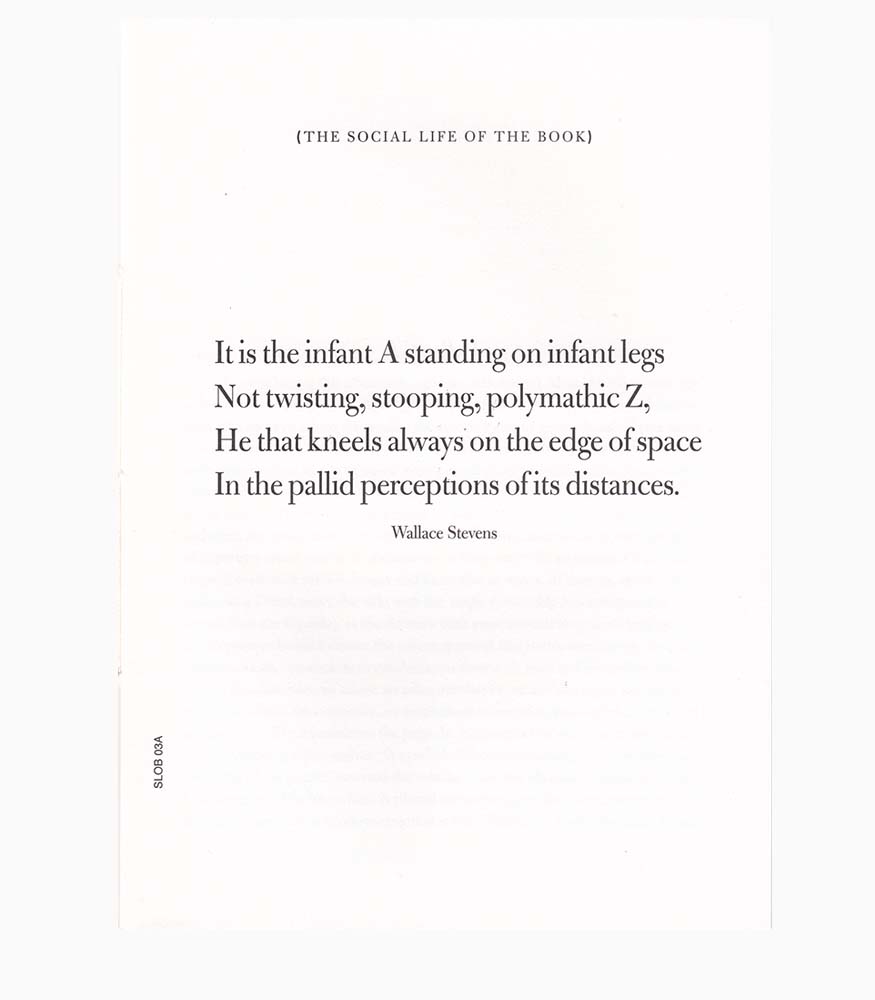 A short piece of fiction by the Amsterdam-based graphic designer and writer Louis Lüthi, “Infant A” follows famous book artist Ulises Carrión as he walks on the High Line in Chelsea, discussing two books simply titled A. 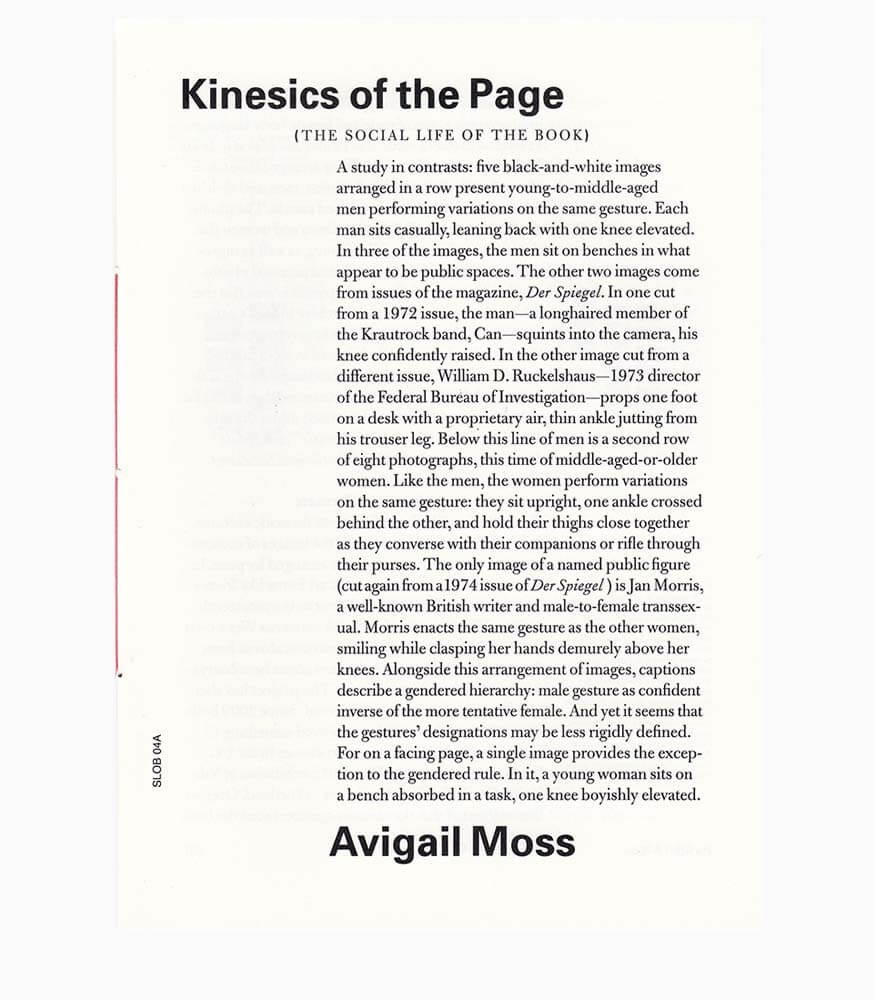 Kinesics Of The Page
Avigail Moss
Paraguay Press - 5.00€ -  out of stock

This installment written by LA-based artist and writer Avigail Moss, develops as a thorough analysis of one particular book: Marianne Wex’s outstanding photo-essay Let’s Take Back Our Space: “Female” and “Male” Body Language as a Result of Patriarchal Structures, from 1979. Moss proposes a contextual approach of the book, in relation to politics and feminism in post-war West Germany, as well as a minute study of its design and page structure, revealing the complexity and force of the volume. 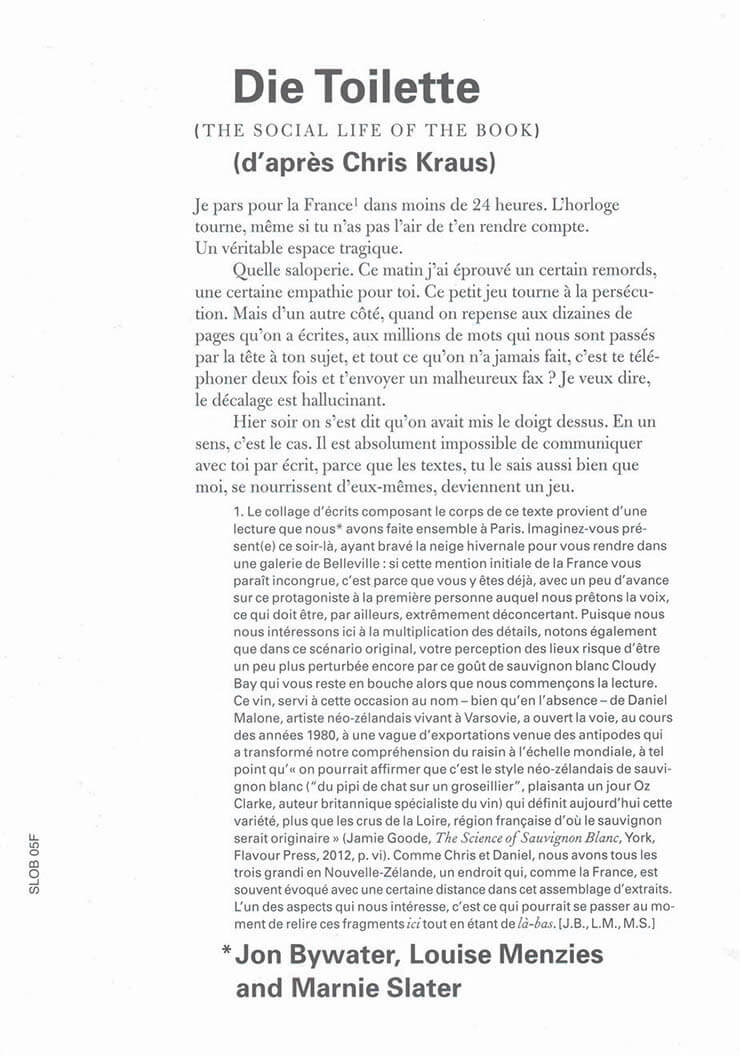 Die Toillette
Jon Bywater, Louise Menzies and Marnie Slater
Paraguay Press - 5.00€ -
“Die Toilette” is an assemblage of text fragments taken from different books by LA-based writer Chris Kraus, conceived and annotated by artists and writers Jon Bywater, Louise Menzies and Marnie Slater. By reading through Kraus’s texts looking for traces of New Zealand, where she grew up, the three Kiwis question the representation of the distant; how it is embodied by characters, situations, language, and in the writing/reading dynamics Kraus creates. The beach, affection and loving relationships, the role of the city, intense relationships with wildlife – all this and more is at stake in this amazing montage. 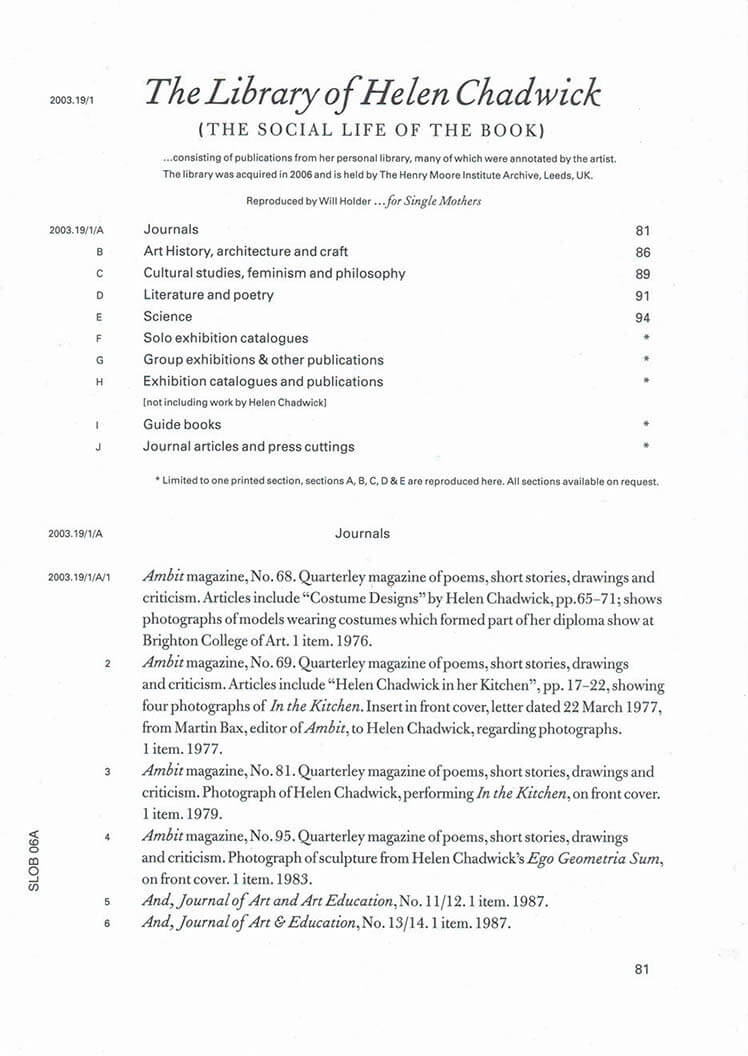 The Library of Helen Chadwick
Will Holder
Paraguay Press - 5.00€ -

The 6th installment of The Social Life of the Book series is a section of the catalogue of publications from English conceptual artist Helen Chadwick’s personal library, reproduced by Will Holder for single mothers. The library was acquired in 2006 and is held by the Henry Moore Institute archive, Leeds, UK. 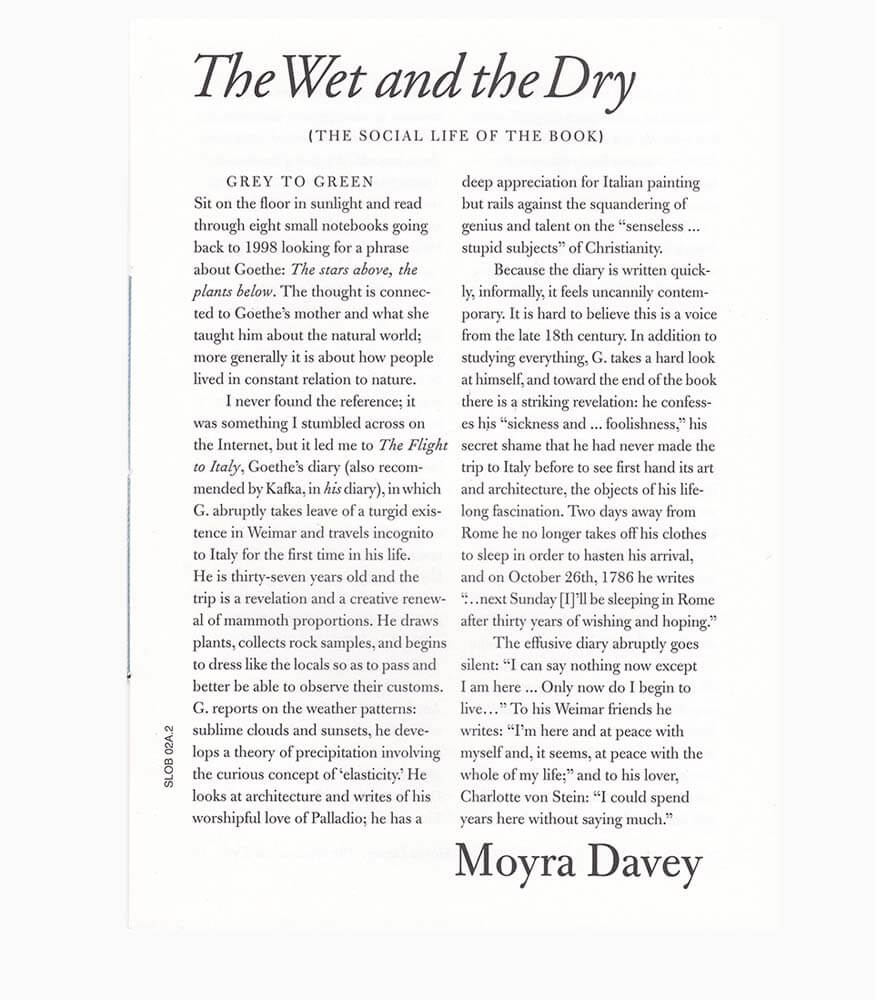 The Wet and The Dry
Moyra Davey
Paraguay Press - 5.00€ -  out of stock
Moyra Davey’s practice of photography is closely connected to the history and the experience of reading. In “The Wet and the Dry”, autobiography and considerations on the medium mixes with the lives of Goethe, Mary Wollstonecraft and the Shelleys. This text was also the basis for Davey’s acclaimed video work The Goddesses. 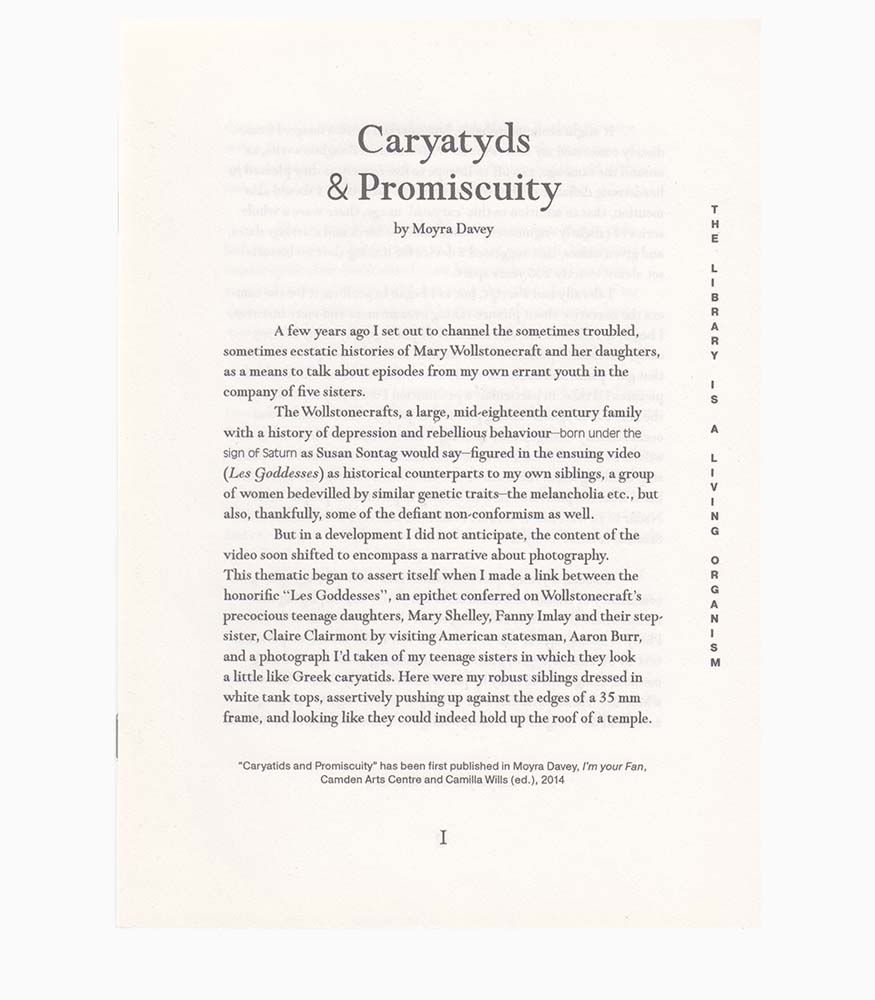 Caryatyds & Promiscuity
Moyra Davey
Paraguay Press - 5.00€ -  out of stock
In “Caryatids & Promiscuity,” Moyra Davey reflects on the ebb and flow of photographic discourse and the impact of its shifting critical reception over three decades of her life and career as an artist, filmmaker, and writer. 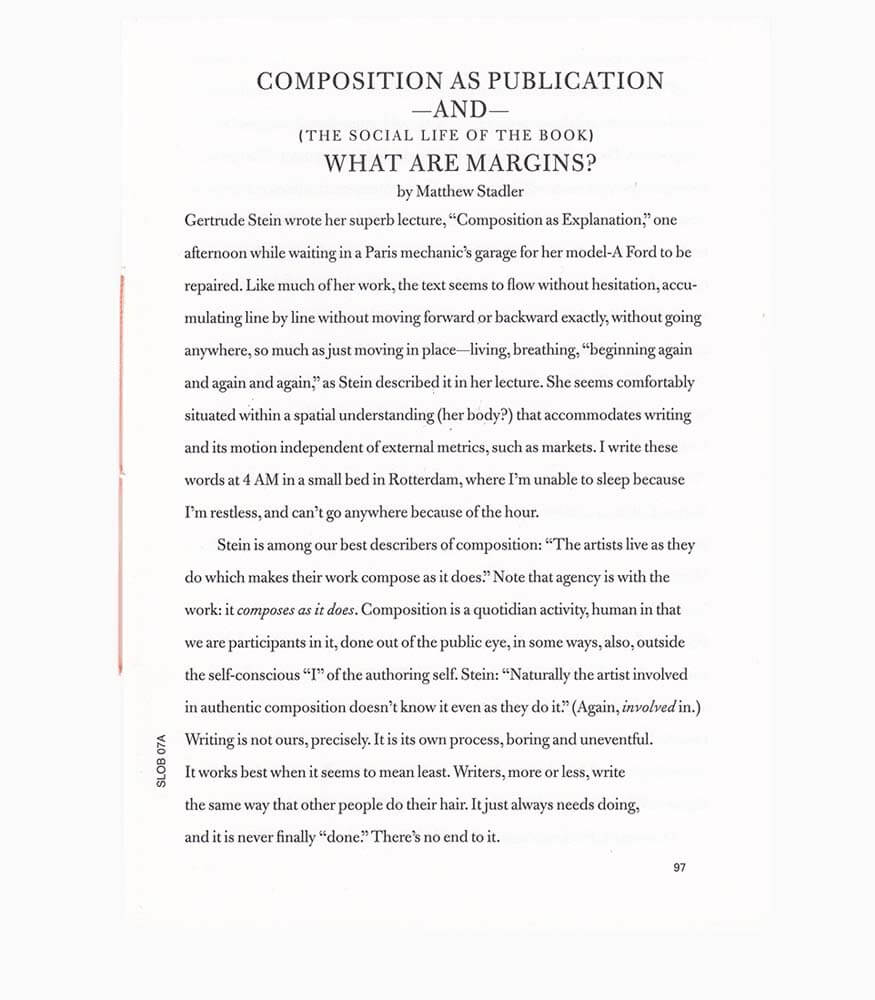 Composition As Publication – And – What Are Margins
Matthew Stadler
Paraguay Press - 5.00€ -  out of stock
An important inspiration for this The Social Life of the Book series, Matthew Stadler is relentlessly challenging preconceived ideas of publishing and the book, in his own writing, lectures and publishing activities. In this new essay, he’s examining the political dimensions of the book, through an unexpected, yet fertile, comparison between today and the invention of the space of the page in the Middle Ages. His praise for the dynamics of the “marginal” introduces a compelling discussion on authorship, the market, and the reader’s agency – putting the emphasis on the democratic openness of the book. 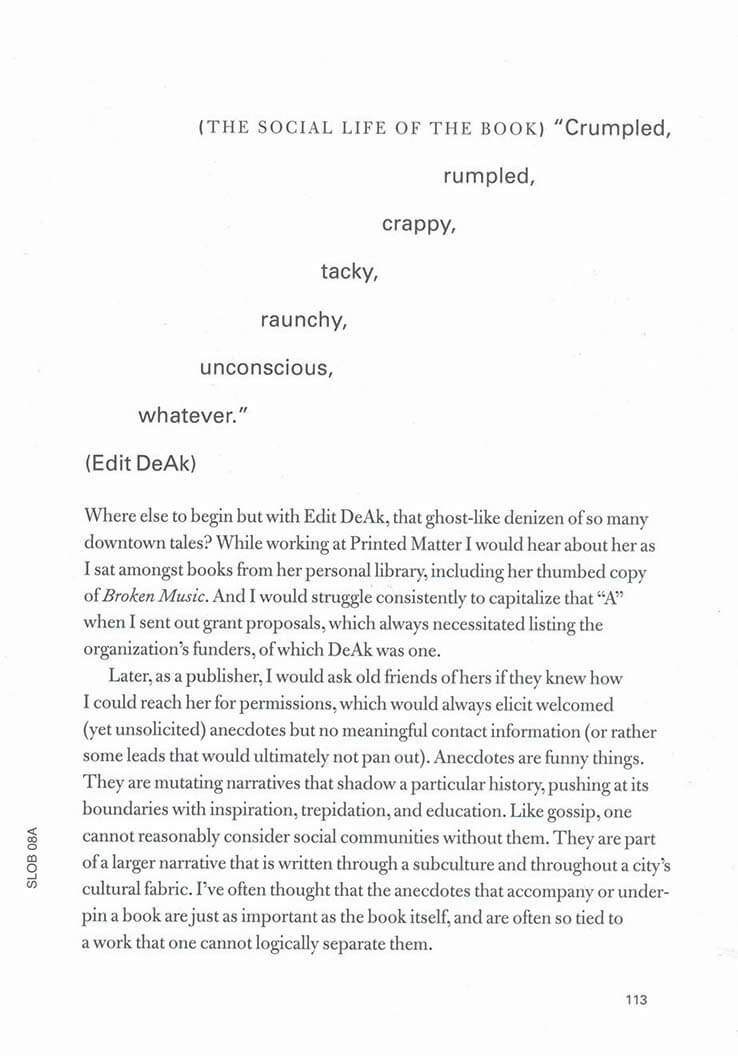 An artist, a musician, and a publisher based in Brooklyn, NY, James Hoff tells here how books got him into art. He considers the complex and stimulating fabric of anecdotes, gossip, secrets, that are shared around artists’ publications, and, further, the role of printed matter in the building of an artist’s community. The essay pays homage to Edit DeAk through its title, and also comprises some pictures of book covers and LP sleeves from Hoff’s collection.