by University of Iowa 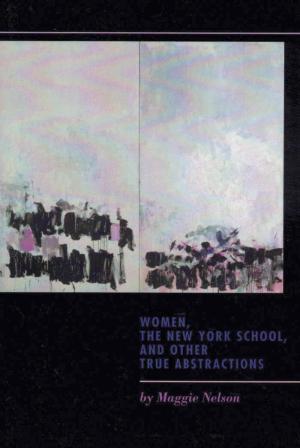 Women, the New York School, and Other True Abstractions
Maggie Nelson
University of Iowa - 28.00€ -  out of stock

"Nelson's revision of the New York School makes it not only more diverse but also more resistant of defining tropes. By showing how a motley collection of poets and artists defied the gendered conventions of both the aesthetic status quo and the so-called experimental, Nelson restores the avant-garde to its raison d'etre: to lead us past orthodoxy to discovery."—Modern Painters

"Nelson has produced the kind of boundary-busting scholarship perhaps most likely to push the field toward greater clarity concerning its parameters, urgent questions, and dramatis personae."—American Literature

“After decades of listening (enthralled, of course) to the knitted ribbon-dress observations of John Ashbery, Frank O’Hara, and James Schuyler, ﬁnally, the other serious ladies of the necessarily ‘so-called’ New York School—Joan Mitchell, Barbara Guest, Bernadette Mayer, Alice Notley, and Eileen Myles—are invited to give their full-throated response. Smart as a whip and fun as an after-hours bar, Maggie Nelson gets fresh with heretofore queerly ignored matters poetic, aesthetic, and feminist. Rearranging the school’s classroom seating, illuminating details, all the while demonstrating how crucial not-caring is to care, Nelson remaps the ‘one flow’ of poetry. Let me be blunt: reading her bravura study’s like spying Joan Jett taking Helen Vendler for a joyride.”—Bruce Hainley

“This is a terrific and necessary book. . . . Maggie Nelson charts new paths for work on the New York School and on postwar experimental writing, and her book will be necessary reading for anyone working in the area—it will reach poets and other writers, visual artists, and scholars interested in the New York School and in avant-garde or experimental work; it will reach readers interested in women’s contributions to the arts, urban culture, and the history of New York City.”—Susan Rosenbaum, University of Georgia, author, Professing Sincerity: Modern Lyric Poetry, Commercial Culture, and the Crisis in Reading

“So many times over the years I’ve been asked, What’s it like to be a woman in rock music? It’s always been sort of a paralyzing question—to answer it is to give the question itself meaning. Maggie Nelson here opens it all up for examination with this incredibly timely and astute book.”—Kim Gordon of Sonic Youth

“Maggie Nelson is deft and revelatory in bringing sociological as well as psychological, stylistic, and political insights to bear on her title terms, ‘women’ and ‘the New York School.’ She lays bare an obscured history, performs imaginative and incisive readings of careers as well as books and poems, and foots her way with exciting skill through the overlapping minefields of professional, national, and sexual politics.”—Eve Kosofsky Sedgwick, author, A Dialogue on Love
In this whip-smart study, Maggie Nelson provides the ﬁrst extended consideration of the roles played by women in and around the New York School of poets, from the 1950s to the present, and offers unprecedented analyses of the work of Barbara Guest, Bernadette Mayer, Alice Notley, Eileen Myles, and abstract painter Joan Mitchell as well as a reconsideration of the work of many male New York School writers and artists from a feminist perspective.

With contagious enthusiasm, Women, the New York School, and Other True Abstractions ranges widely and covers collaborations between poets and painters in the 1950s and 1960s; the complex role played by the “true abstraction” of the feminine in the work of John Ashbery, Frank O’Hara, and James Schuyler; the intricate weave of verbal and visual arts throughout the postwar period, from Abstract Expressionism to Pop to Conceptualism to feminist and queer performance art; and the unfolding, diverse careers of Mayer, Notley, and Myles from the 1970s to the present. Along the way, Nelson considers provocative questions of anonymity and publicity, the solitary and the communal, the enduring and the ephemeral, domesticity, boredom, sex, and politics.

By asking us to rethink the ways in which we conceptualize “schools” and “avant-gardes” and eventually drawing our attention to larger, compelling questions about how and why we read—and how gender and sexuality inform that reading in the ﬁrst place—Maggie Nelson not only ﬁlls an important gap in the history of American poetry and art but also gives an inspired performance of the kind of lively, audacious, and personally committed criticism that befits her subject.