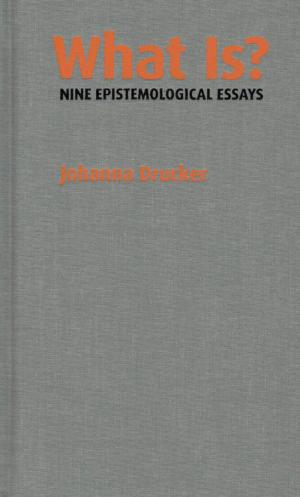 What Is? - Nine Epistemological Essays
Johanna Drucker
Cuneiform Press - 30.00€ -  out of stock

In WHAT IS?, Drucker traces the invisible thread that links letters to writing to books to the digital age. In so doing, she makes sense of emerging technology and the way it has insinuated itself into the culture of book making, writing, and reading. Drucker's grand arguments are based on modest means. In this case she is starting with the humble letter. But, by probing the philosophy of language as well as the rhetoric of art, she builds toward a broader picture. In the end, her investigation concludes with nothing less than a new understanding of digital materialism.

Johanna Drucker is the inaugural Breslauer Professor of Bibliographical Studies in the Department of Information Studies at UCLA. She is internationally known for her work in the history of graphic design, typography, experimental poetry, fine art, and digital humanities. In addition, she has a reputation as a book artist, and her limited edition works are in special collections and libraries worldwide. Her most recent titles include SpecLab: Digital Aesthetics and Speculative Computing (Chicago, 2009), Graphic Design History: A Critical Guide (Pearson, 2008, 2nd edition late 2012), and WHAT IS: NINE EPISTEMOLOGICAL ESSAYS (Cuneiform Press, 2013). She is currently working on a database memoire, ALL, the online Museum of Writing in collaboration with University College London and King's College, and a letterpress project titled Stochastic Poetics. A collaboratively written work, Digital_Humanities, with Jeffrey Schnapp, Todd Presner, Peter Lunenfeld, and Anne Burdick was published by MIT Press in 2012.