[Reading] From Poem to Body: with Pelumi Adejumo and Nikima Jagudajev 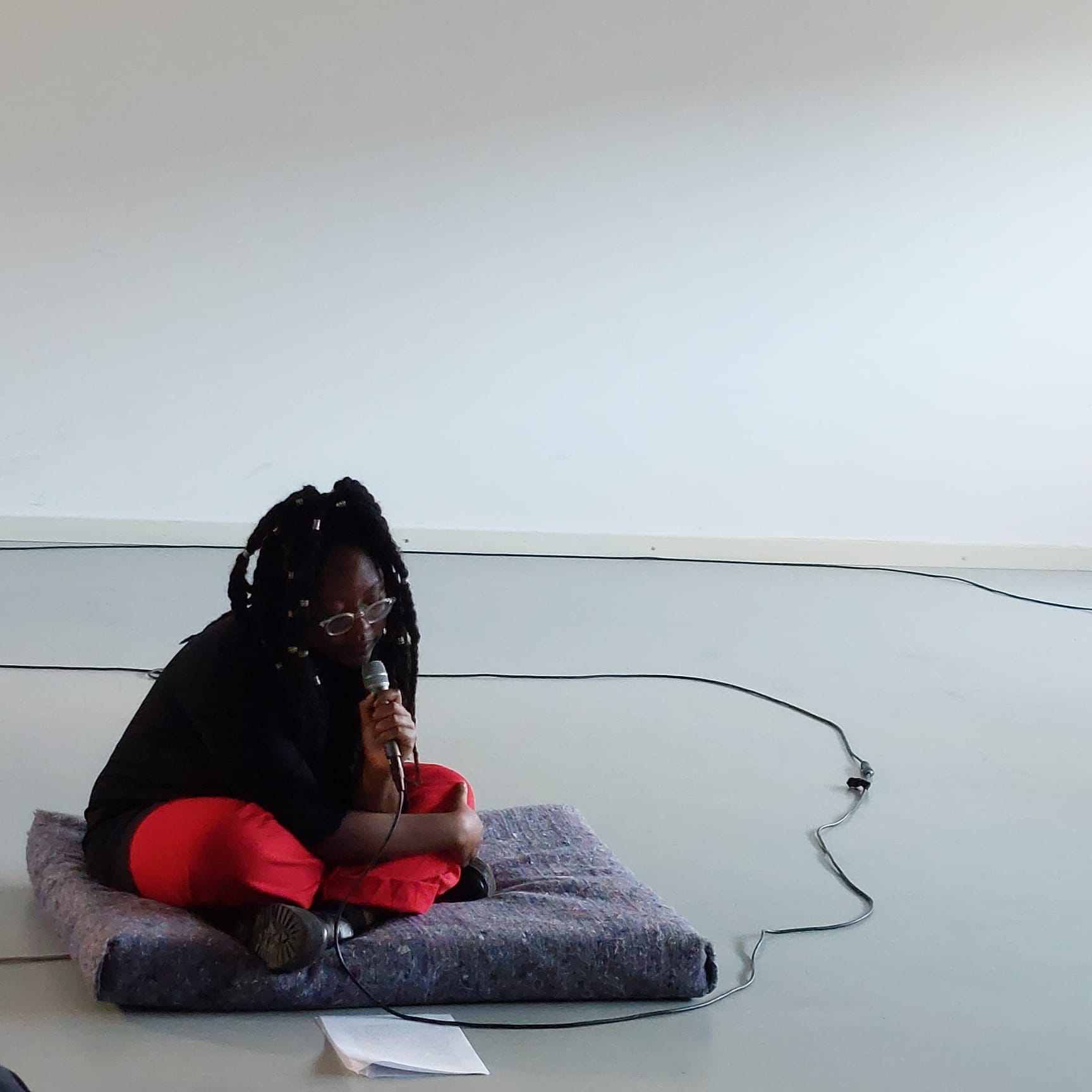 Join us for an evening of reading performances at rile* with artists Pelumi Adejumo and Nikima Jagudajev.

Pelumi Adejumo will read De Verstrengeling, a collection of poems narrating turbulent scenes in a Pentecostal church and an interview about the public v.s. private life of the very first African American Opera singer to be broadcasted on live tv. Between mumbling and speaking, between performing and reading, between the public and private spheres Pelumi Adejumo brings an ode to the Great Opera singer Marian Anderson, by interviewing her most intimate companion: mr. Snoopy Cat. Earlier published in literary magazine nY47 under the title HET PLOT, the text explores the lines between devotion and powerlessness, kinship and treachery. Raising questions on the consequences of visibility and the Christ-like sacrificial tendencies of representation.

Nikima Jagudajev will read THE BACKSTREET BOYS, written within a framework of entangled fiction and critical praxis, the text focuses on kinship and mothering from the point of view of one person’s sporadic life story. Their story begins in college and moves through various influential encounters that grapple with entanglement, boundaries and the structures necessary for them to commit to Love. The Backstreet Boys looks at kinship as an antithesis to the institutionalization of family, pedagogy and identity, and mothering as an un-gendered political practice; a social responsibility towards the future of this planet.

Pelumi Adejumo (Lagos, 1998) is a runaway pastor child, writer and singer living in the Netherlands. Working with themes as displacement, devotion and lamentation. Her texts can be seen as assemblages combining songs, tales, dreams and letters in an attempt to leave the listener spellbound. Using opacity, unintelligibility and mix matching languages as tools to open up creative and musical possibilities, and rendering the dominance of enforced languages powerless. Her work was part of the anthology ’50 stories for tomorrow’ by International Literary Festival Utrecht. She has written for nY, de Gids, het Nationale Theater, deBuren, Nationale Opera & Ballet, Sonsbeek 20-24, Mister Motley, and performed at festivals such as Into The Great Wide Open and Read My World. She has a BA in Creative Writing from Artez University of the arts, and is enrolled for a master at the Dutch Art Institute.

Nikima Jagudajev (b. 1990) is a choreographer based in New York and Brussels. Their first solo exhibition “Basically” took place in 2021 at Bergen Kunsthall (Norway). This process based live practice that expands formal dance into the construction of open-ended socialities has taken form in venues including Shedhalle (Zürich), Kurimanzutto (Mexico City), Centre d’Art Contemporain Genève, The Whitney Museum of American Art, MoMA PS1 and the Rockbund Art Museum (Shanghai) as well as in the context of Material Art Fair’s Immaterial (Mexico City), 89+ at LUMA/Westbau (Zürich), kunstenfestivaldesarts (Brussels) and as part of the Marrakech Biennale (Morocco). Their published work includes ‘The Backstreet Boys’ as part of Bergen Kunsthall’s Speculative Histories text commission platform (2021) and co-published by Karmaklubb*, ‘Relations of Unpredictable Encounters’ in the Movement Research Performance Journal (2017) and ‘the landscape thinks itself in me’ in Asad Raza’s Root Sequence. Mother Tongue (Walther König, 2018). 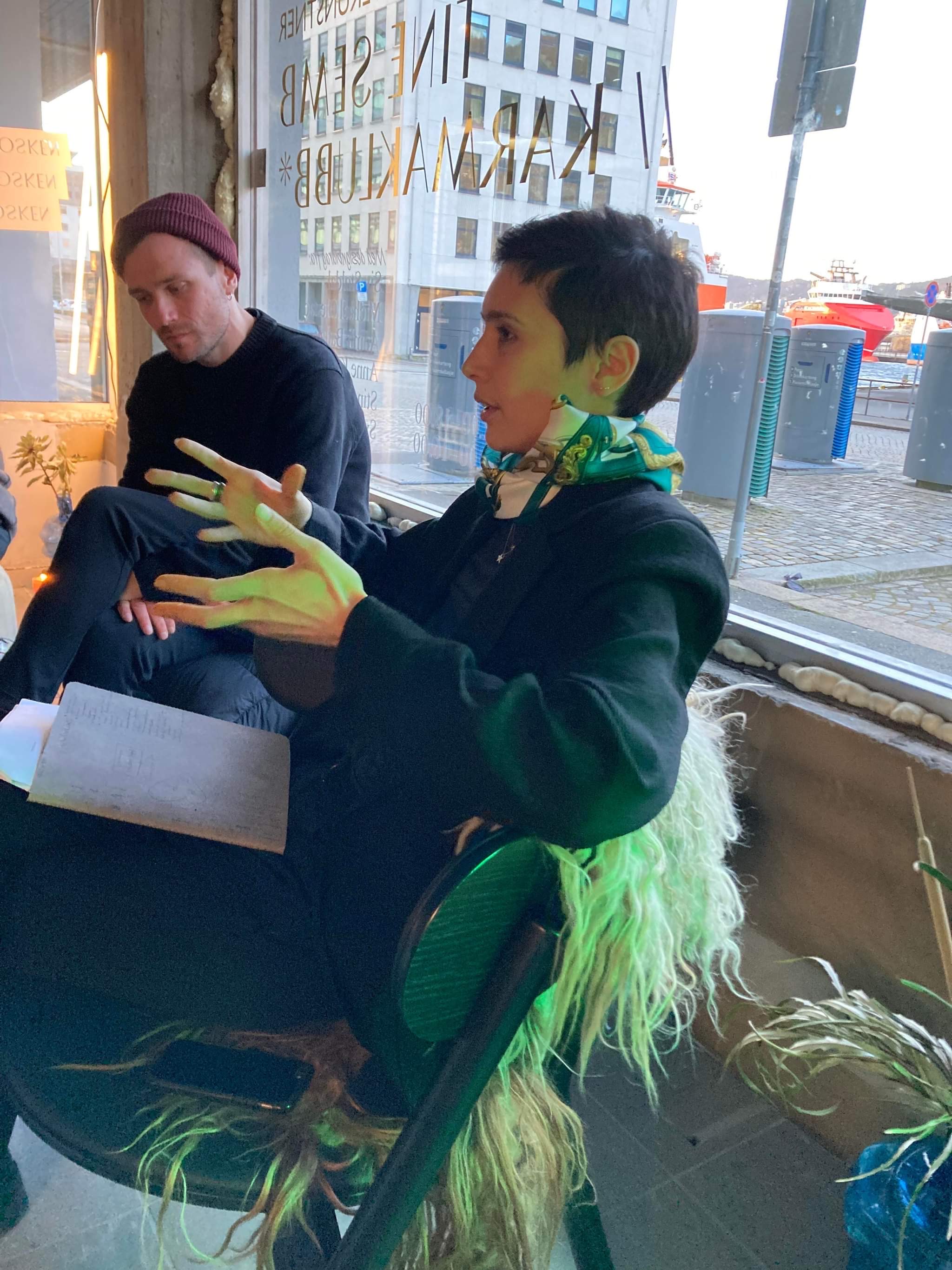