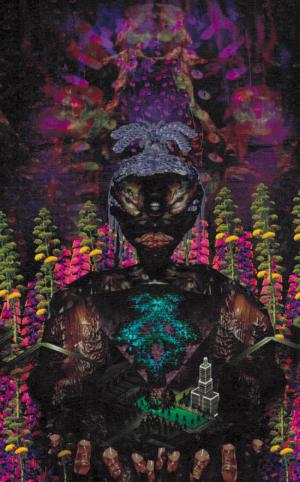 Manchester, UK. 2080.
It is a subculture whereby people are sexually attracted to the idea of transmitting and receiving STI’s. It started as a counter-culture against computer algorithms that determine every aspect of people’s lives, from careers to romantic interests, where they live, all over the world. The Virosexuals decided to alter their own bodies in order to subvert the algorithm. Now treated as non humans and thus ignored, Virosexuals like Amygdala are left to survive on their own…

Amygdala’s world consists of: her open relationship with Cel, her philosophical musings and drugged-up rants with her best friend Skunk/Winny, as well as her pursuit of all the completely curable (and thus fetishised) meatspace ‘zeases the club scene can offer. She tries to negotiate her body, her sexuality and her desires and find the source of the ‘Petitmort' threat…!

Orion J. Facey's The Virosexuals, the author’s first novel, is a science-fantasy you won’t regret plugging into.