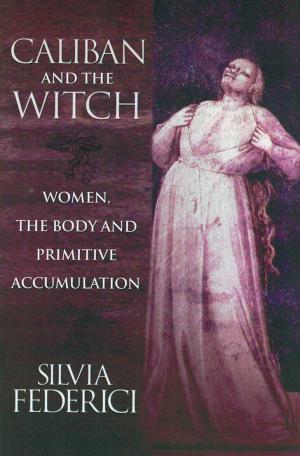 Caliban and The Witch: Women, The Body and Primitive Accumulation is a history of the body in the transition to capitalism. Moving from the peasant revolts of the late Middle Ages to the witch-hunts and the rise of mechanical philosophy, Federici investigates the capitalist rationalization of social reproduction. She shows how the battle against the rebel body and the conflict between body and mind are essential conditions for the development of labor power and self-ownership, two central principles of modern social organization.

"In the neoliberal era of postmodernism, the proletariat is whited-out from the pages of history. Federici recovers its historical substance by telling its story starting at the beginning, with the throes of its birth. This is a book of remembrance, of a trauma burned into the body of women, which left a scar on humanity's memory as deep and painful as those caused by famine, slaughter, and enslavement." — Peter Linebaugh

Silvia Federici is a longtime feminist activist and teacher. In 1972 she was among the founders of the International Feminist Collective, the organization that launched the Campaign for Wages For Housework in the US and abroad. She has also been active in the anti-globalization movement and the anti-death penalty movement. Silvia Federici was a founding member of the Committee for Academic Freedom in Africa, which for more than ten years documented the struggle of African students against the austerity programs imposed by the IMF and the World Bank on African countries. She has taught in the US and in Nigeria and is Emerita Professor of Political Philosophy and International Studies at Hofstra University (Hempstead, New York). Federici is the author of many book and essays on political philosophy, feminist theory, political philosophy, cultural studies, and education.