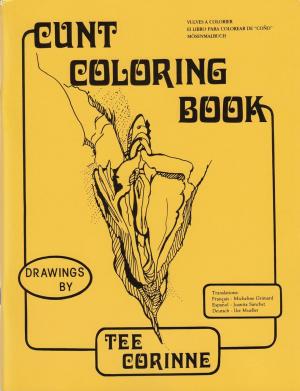 Over three dozen c**ts of every size and description for you to color. Originally used for a sex-education class. Crayons not included.

Tee A. Corinne (born Linda Tee Cutchin), (November 3, 1943 - August 27, 2006) was an American photographer, visual artist, writer, and activist, whose published work includes the infamous (or justly famous) Cunt Coloring Book. She was born in St. Petersburg, Florida, and educated at Newcomb College, Tulane University; St. Petersburg Junior College (A.A. 1964); University of South Florida (B.A. 1965); and Pratt Institute (M.F.A., 1968), she became an outspoken advocate and activist for lesbian sexual, literary, and artistic expression. She grew up in the Southern United States and the Bahama Islands, went north to graduate school, and west to sort out her life in 1972. Married once for seven years, she spent the last twenty-five years of her life in the company of women. She began exhibiting and publishing art and writing in the mid-1960s. She was a co-facilitator of the Feminist Photography Ovulars (1979-1981) and a co-founder of The Blatant Image, A Magazine of Feminist Photography (1981-1983). She was the author of one novel, three collections of short stories, four books of poetry and numerous artists books and small edition publications. Family, her show of mixed media drawings about growing up in an alcoholic family, has been the subject of a video interview by Jane Scott Productions. Portfolios of her art have been published in Lesbian Subjects, Feminist Studies, Gallerie: Women's Art, The Advocate, Philadelphia Gay News, The Lesbian Inciter, I Am My Lover (first edition, 1979) and Femalia. Corinne wrote about art for a variety of publications and, from 1987, was the art books columnist for Feminist Bookstore News. A co-founder and past co-chair of the Gay & Lesbian Caucus (an affiliated society of the College Art Association), she also co-founded the Women's Caucus for Art Lesbian & Bisexual Caucus. In 1991, she was chosen by Lambda Book Report as one of the fifty most influential lesbians and gay men of the decade, and in 1997 she received the Women's Caucus for Art President's Award for service to women in the arts. According to Completely Queer: The Gay and Lesbian Encyclopedia,"Corinne is one of the most visible and accessible artists in the world." She died in Oregon, aged 62.