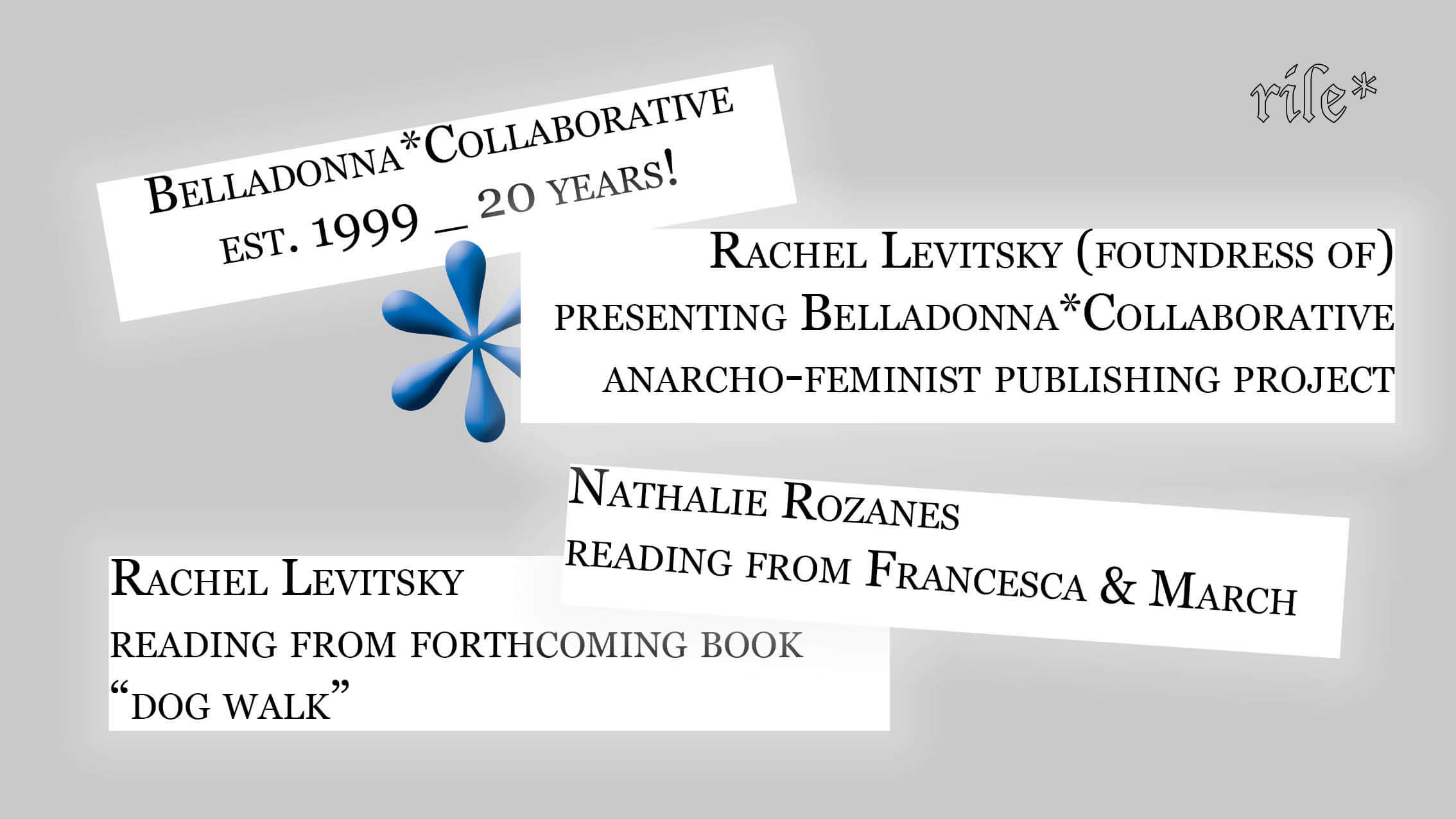 Nathalie Rozanes will read excerpts from her performances March (forthcoming) and Francesca (2016).

Rachel Levitsky will read from her forthcoming book Dog Walk (Split Level Press) containing work from both “Existing Condition” and “Against Travel”.

***
Rachel Levitsky (Born December 2, 1963) is a feminist avant-garde poet, novelist, essayist, translator, editor, educator, and a founder of Belladonna* Collaborative. Levitsky has written three books (with Futurepoem and Ugly Duckling Press) and nine chapbooks. In 2010, she and writer Christian Hawkey founded the Office of Recuperative Strategies (OoRS). It is a research and pedagogical laboratory that promotes a concept of cultural sustainability and radical recuperation toward possible futures that invent new fields of vitality, desire, hybridity, activism, and dwelling. OoRS teaches semester long classes at Pratt Institute and conducts shorter workshops, walks, and urban inversions at a range of places and situations from the superfund site of The Gowanus Canal, to the elite institution such as Harvard University and The University of Amsterdam, to dystopian urban transit hubs such as Alexanderplatz and the Holland Tunnel.

Nathalie Rozanes (b. Zürich 1986) is an actress, performer, director, translator and writer based in Belgium. As an actress she has performed across Europe for film and stage in projects by directors such as Claudia Bosse, Ziad Doueiri, Lucie Guien, Sofie Kokaj & Ted Tremper. Currently, she is writing a feature film project called Ushuaia produced by Neon Rouge Production. Her solo performance Francesca, a tribute to photographer Francesca Woodman, which includes fragments of Ariana Reines’Coeur de Lion, premiered at Théâtre National in Brussels in 2016. Her performance March, a duet with dancer Elizabeth Ward with electronic music by Frédéric Altstadt will premier in November 2019. Both pieces explore acts of language, speaking, as performance. They are wickerworks of writings of her own and others. They render which voices speak to and through us and in what form, filtered by the body. Nathalie graduated magna cum laude from INSAS in Brussels in 2011. She has written lyrics for various musicians such as Sanja Maas, Caroline Cohen and Verveine. Her writing has been published by Soirée Berkson (Vienna) and This Container Magazine (Stockholm/Brussels). https://nathalie-rozanes.tumblr.com

Belladonna* Collaborative is a feminist avant-garde collective, founded in 1999 by Rachel Levitsky. Belladonna* started as a reading and salon series at Bluestocking’s Women’s Bookstore on New York City’s Lower East Side. In June 2000, in collaboration with Boog Literature, Belladonna* began to publish commemorative “chaplets” (defined as short chapbooks of immediate writing or work-in-progress) of the readers’ work. This series continues today and has reached well beyond #200.

2019 marks the 20th anniversary of the Belladonna* mission to promote the work of women* and feminist writers who are adventurous, experimental, politically involved, multi-form, multicultural, multi-gendered, impossible to define, unpredictable, and dangerous with language. Belladonna* is committed to publishing and building literary community among women-identified and LGBTQIA+ authors who write off-center, producing work that is political and critical; situational rather than plot-driven; inter-subjective, performative, or witnessing rather than personally revelatory; work that reaches across the boundaries and binaries of literary genre and artistic fields, and that questions the gender binary. http://www.belladonnaseries.org/