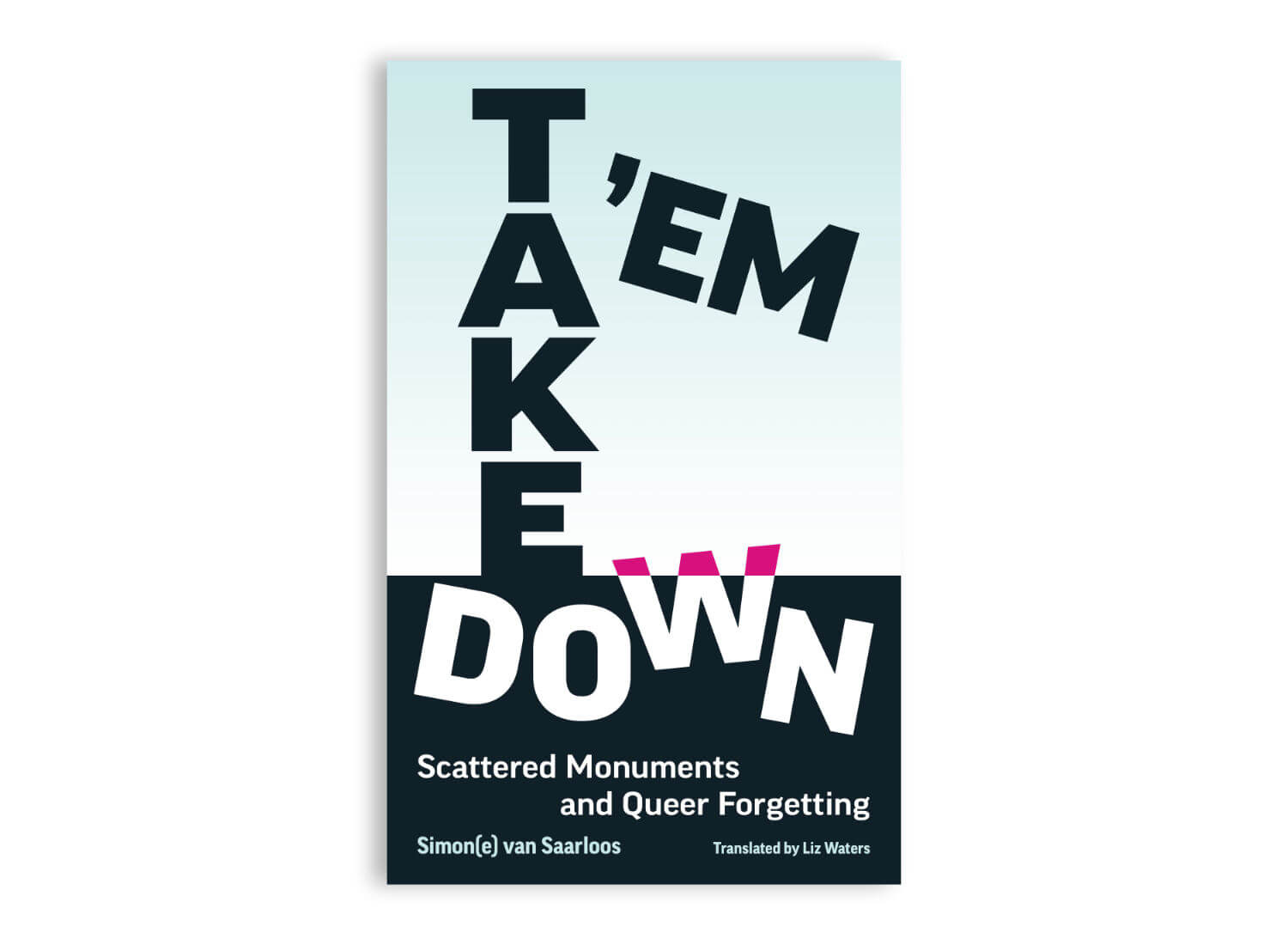 To celebrate the launch of Simon(e) van Saarloos' new book, TAKE ‘EM DOWN: Scattered Monuments & Queer Forgetting, we welcome you to a night of conversation, presentation, performances and an abundance of presence.

Simon(e) van Saarloos will present the book in conversation with Daniela Bershan (artist, DJ and independent researcher). Following this there will be a performance by Khadija El Kharraz Alami (actress, theatre maker and performer). Welcome!

Who determines what is remembered and commemorated, and why? Slavery happened long ago, too long ago for apologies by the Dutch government, according to prime minister Mark Rutte. Neuroscientists investigate how past events influence lives today and call it ‘intergenerational trauma’. How can we commemorate something that is both in the past and a daily reality?

In Take ‘Em Down Simon(e) van Saarloos is inspired by the historically invisibilized lives of LGBT people and queers. They demonstrate the power of forgetting and wonder if and how it’s possible to live without a past. At the same time, Van Saarloos criticizes the way that a ‘white memory’ – including their own – treats some stories as self-evident while other histories are erased.

Take ‘Em Down questions the normative architectures of commemoration: if a minute of silence signals respect during a vigil, how do loud bodies perform proximity to the past? What if toppled statues become barriers for able-bodied folks, disrupting capitalist rhythms? Take ‘Em Down is not about reconciliation through guilt but about living messy lives with pain and grief.

“I love the expansive nature of ways of thinking about commemoration in Take ‘Em Down; the role of physical and imaginative space. I also love that the essayistic form is informed by the process of adaptability, informed by Simon(e) van Saarloos’ childhood history, and that van Saarloos reflects the ability as a writer to know the limits of their own imagination. The notion of stumbling stones implies being tripped up and so becomes both commemorative and process defining. There is so much to say and love about this book!”

Simon(e) van Saarloos (1990) is the author of four books in Dutch, including a novel and an ethnographic trial report. Two of their books are available in English: Playing Monogamy and Take ‘Em Down. Scattered Monuments and Queer Forgetting.

Currently, they are writing a pro-violence theatre play for Ulrike Quade Company about abortion. Together with Kim TallBear, they recently published an online exchange: “The Non-Monogamy Letters”. Saarloos is the host of *The Asterisk Conversations podcast and curator of ABUNDANCE (“We must bring about the end of the world as we know it” – Denise Ferreira da Silva) at Het HEM, Amsterdam. Saarloos just moved to the Bay Area to start a PhD in Rhetoric at UC Berkeley.

Daniela Bershan a.k.a. Baba Electronica is an artist, DJ and independent researcher. Through her work – ranging from sculpture and performance to community facilitation and sound – she proposes practices of collective intimacy and care as a way to study and honor affective and relational structures; Her current work is exploring the ecological, historical, emotional and political dimensions of reproductive labour and its re-organization through different registers. She composes and holds potentia-spaces for erotic/aesthetic practices and non-monotonic thinking.

Khadija El Kharraz Alami grew up in Amsterdam and, free from all convention and predictability, she forged her way to a place in the Dutch theatre landscape. Her productions persistently question perspectives – as well as the position that she has now attained. Last year, she presented the solo Now I am Medea at Kaaistudios, which won her the KBC Young Theatre Prize at Theater Aan Zee. In the series Re-claiming Space, she is now working on her own staging of The Waves by Virginia Woolf.